Surfin’ on a Seesaw

You never really see playgrounds with seesaws nowadays, do you? That may have something to do with all the idiotic things we used to do with them when we were kids. They were great so long as the kids on both sides were committed to riding for the same amount of time and communicated any desire to leave early. Yeah, kids aren’t always the best at communication. I’ll never forget the jarring feeling in my head I’d get when the other kid decided abruptly that he was done and jump off from the bottom, leaving me to slam into the ground from four feet in the air. Those things were notorious for causing smushed fingers, bit tongues and bruised bottoms along with the occasional crotch or head injury. And that’s when they were used properly.

This chick’s got the right idea.

But, oh! The joy of seesaw surfing! Every once in a while I’d get one all to myself (and with no parents nearby to tell me I’m going to fall and kill myself). I would carefully climb up to the center of the board and adopt a surfer’s stance as I attempted to balance both ends of the seesaw in the air. Invariably, some other kid would see how cool I looked and next thing I know, it’s all I can do to keep standing as my board is being overrun with screaming children. Sooner or later, they’d all get bored and run off to the monkey bars or something and I could climb back up and find that peaceful balance that gave me such a sense of joy and accomplishment.

Life has been a bit like this for me recently. Being a politically-minded recovering alcoholic, it is a constant struggle to find that balance between activism and “No more big deals.” I can’t allow myself to get swept up in strong emotion by injustices or corruption, neither can I sit idly by and pretend that all is right with the world or simply shake my head and bemoan the state of affairs today. Some days I can find a good balance. Other days it feels like everyone’s crowding my seesaw. When this happens, it’s hard to quiet the mind and connect to that power which keeps me in check. I lean too far one way, then end up overcompensating in the opposite direction. Back and forth, steady… easy… until I find my calm and regain my balance. 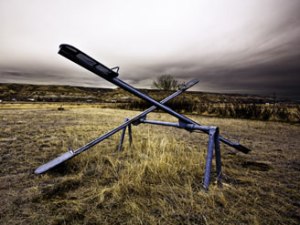 It’s been a rough couple of weeks in the political sphere and I’ve had to disconnect myself from much of the discussion so that I can peacefully gather my thoughts and find where I stand instead of simply reacting. Wouldn’t it be lovely if everybody did this? Perhaps we wouldn’t be where we are today, with so much division and hate between the “us”es and the “them”s. The best thing about all this is that many times, by the time I am able to formulate a stance, the discussion has moved on to the next big crisis. In this way, I’ve learned to disconnect quicker so I spend less time wrapped up in the whirlwind of rhetoric and more time in peace. The more practice I get at this, the more I learn to calmly act instead of violently react… and the more I learn about who I really am and what is really important to me.

All the news that’s fit to print

What’s on my mind lately?

What else you got?

Folks who show me their worlds

A Walk on the Wild Side

For those who love addicts

My blog to help me stop drinking.

dangling on the edge
What...Me Sober?

Stumbling along the Middle Path, one day at a time.

Diary of a teenage hedonist.

There are no coincidences.

Crazy is relative. Just ask my relatives. And music!

A blog about getting sober

"Christianity is one beggar telling another beggar where he found bread" - D. T. Niles

Another Kind of Perfect

How I Secretly Quit My Secret Habit of Secretly Drinking

Every day a soul must walk

Healing from the inside

A blog about quietly getting sober

from liquid courage to sober courage

Finding and practicing grace in recovery

A Place to be Mindful a Place to Heal

TRUDGING THROUGH THE FIRE

-Postcards from The Cauldron

...all those things we don't talk about in polite society

And Jill came tumbling after...

As Jim Sees It

Memoir of a Maldivian drug addict in recovery

Expatriation was easier as a broke college student

Smile! You’re at the best WordPress.com site ever

Gotta Find a Home
Friending Myself

A sobering journey to greater love. For me. By me.

Living Life One Day At A Time

An evolving tale of a new life in recovery

A Place for Those Affected by Addiction

Message in a Bottle
Heather Kopp

Words fail, but sometimes I try