It just goes to show, there are no “hard and fast” rules in life.

I did something yesterday that was very much outside my nature and very much frowned upon. Please don’t think it was out of my nature because it was frowned upon, as it is very much IN my nature to do all those things that are frowned upon. The frowning is more of a safety issue than anything, though, and I am much better about trying to keep myself safe now than I used to be.

The “out of my nature” bit was me setting aside my usual “tough love” to extend some real compassion to someone in need.

Any other day, any other circumstance, I not only wouldn’t have done what I did, but I would counsel anyone else… strike that, I would laugh my ass off at anyone else attempting to do what I did. It just doesn’t work. I know! I’ve already proven to myself that it’s asinine! I got a text from someone yesterday, though, that said just the perfect words in the perfect way so that I knew I had to do something stupid. I knew just how stupid it was and I really was scared. I sent Biggie a text letting him know where I was going to be just in case things went badly, I prayed, and I did something very, very stupid.

I’m not saying that I did something that has changed the course of the world, not even for just one person. But I couldn’t have asked for a better outcome to such a long shot, “Hail Mary” pass. Pride told me I was wasting my time; that I was going to make matters worse instead of better. Some little voice inside me, though, said, “Here is your ONE exception to this rule.” It was like all the fates conspired together to open up this one moment in space and time where miracles can happen.

Rules are generally designed to protect us from some danger that others experienced before the rule was set in place. I want to know how many people actually tried drying their hair in the bathtub to prompt the use of that stupid little tag. Some rules should never be broken (seriously, you cannot wash and dry your hair at the same time). However, there are times when the breaking of a rule will actually save a life.

When I was about 15, I knew a kid who was involved in a really bad car accident. This was a really great kid, always played by the rules, just a genuinely loving and lovable type. He ALWAYS wore his seat belt! He was driving down a back road one night and, like many of those back roads I grew up on, it suddenly went from blacktop to gravel. He hit the gravel losing control of his car and it rolled down into a ravine. His car was completely beat to hell with both sides of the roof caved in. There was only one spot in the middle of the front seat which was large enough for a person to sit. Wouldn’t you know? This was the one time he didn’t wear his seat belt and that is what saved his life. He was beat up pretty badly, but if he’d been restrained in the driver’s seat, his body would’ve been crushed when the roof caved in.

Kids, wear your seat belts. The chances are so much greater that they will SAVE your life than not. The point isn’t that rules are pointless, but that there are times you have to break them. There are times that it’s worth taking that huge chance. Sometimes, it’s a matter of either breaking a rule or betraying who you are. 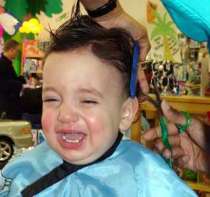 My son has been wanting to grow his hair out long, but his stepmother keeps taking him to get it cut and says he doesn’t have a say until he’s out on his own. Every time he comes over with these horrible, short haircuts, he’s just so sad. He’s afraid to speak up because he doesn’t want to defy her, but it’s just hair and it really bugs him. I told him next time to put his hands on his head and scream until she gives up. He looked at me like I’d just lost my mind (kind of like you are right now, I reckon). “Or just deal with the stupid haircuts you hate until you’re old enough to live on your own,” I replied. I explained how we have to decide what’s important to us and then do whatever it takes to make that happen. “But I’ll get in trouble!” he said. “Yup. And with good reason! But you’ll still have your hair.” He’s a good boy and it tickles me to picture him throwing a fit like a 2-year-old at the barber shop. I don’t want him to grow up to be defiant; I just want him to learn about sacrifice and doing hard things.

Most of all, I want him to be true to himself no matter what anyone else says… even himself. I want that for him because that’s what I want for myself. I’ve lived my whole life concerned about the rules – abiding them, breaking them, bending them just enough…. Sometimes, you just have to throw caution to the wind and say, “Rules be damned! Nothing ventured, nothing gained!” Yesterday, I almost missed out on an amazing experience simply because I KNEW it was a bad idea.

It’s still a bad idea and I’m not so cocky as to think this will ever work again. However, I am eternally grateful that I was able to hear that still, small voice telling me to give it a shot and that I decided it was far more important to listen to that voice than to follow the rules.

All the news that’s fit to print

What’s on my mind lately?

What else you got?

Folks who show me their worlds

A Walk on the Wild Side

For those who love addicts

My blog to help me stop drinking.

dangling on the edge
What...Me Sober?

Stumbling along the Middle Path, one day at a time.

Diary of a teenage hedonist.

There are no coincidences.

Crazy is relative. Just ask my relatives. And music!

A blog about getting sober

"Christianity is one beggar telling another beggar where he found bread" - D. T. Niles

Another Kind of Perfect

How I Secretly Quit My Secret Habit of Secretly Drinking

Every day a soul must walk

Healing from the inside

A blog about quietly getting sober

from liquid courage to sober courage

Finding and practicing grace in recovery

A Place to be Mindful a Place to Heal

TRUDGING THROUGH THE FIRE

-Postcards from The Cauldron

...all those things we don't talk about in polite society

And Jill came tumbling after...

As Jim Sees It

Memoir of a Maldivian drug addict in recovery

Expatriation was easier as a broke college student

Smile! You’re at the best WordPress.com site ever

Gotta Find a Home
Friending Myself

A sobering journey to greater love. For me. By me.

Living Life One Day At A Time

An evolving tale of a new life in recovery

A Place for Those Affected by Addiction

Message in a Bottle
Heather Kopp

Words fail, but sometimes I try